The Chinese Communist Party was founded in 1921 and formed the People’s Republic of China’s first government in 1949. It remains the country’s sole governing political party and pervades all aspects of society.

As a new class of urban factory workers emerged during the Industrial Revolution in the 19th century, capitalism came under increasing attack for not doing enough to protect the proletariat. Chief among these critics was Karl Marx whose ideas were first adopted in Europe and formed the backbone of communist political parties.

By 1985, one-third of the world’s population lived under one-party Marxist-Leninist systems of government and communism was seen as an alternative to capitalism for much of the 20th century. Today there are just four self-declared communist countries left standing. As the world’s second-largest economy, China is by far the most influential.

The number of socialist countries peaks in 1985

The Communist Party’s first national congress is held in late July in Shanghai and Jiaxing. A Russian and a Dutch communist – both representatives of the Soviet Union-led Communist International organisation – attended the congress. The party later designates July 1, 1921 as its official founding date.

With the support of the Soviet Union and the Communist Party, the Nationalist Party, or Kuomintang (KMT), forms the Government of the Republic of China in Guangzhou on July 1, 1925. The KMT’s rightist leader, Chiang Kai-shek, dismisses his Soviet advisers and civil war breaks out two years later after Chiang purges the Communists from government. The war continues intermittently until 1949.

Encircled by KMT forces led by Chiang Kai-shek, a number of Red Army brigades break out from the Communist headquarters in southwest China to begin an epic flight known as the Long March.

The Communist Party wins the civil war and Mao declares the foundation of the People’s Republic of China in 1949.

Party membership is close to 4.5 million.

Chiang Kai-shek and about 2 million KMT soldiers retreat to Taiwan, marking a start of a de facto separation of China and a military stand-off that continues to this day.

Source: 中国人民解放军全史, The Academy of Military Science of the Chinese People’s Liberation Army 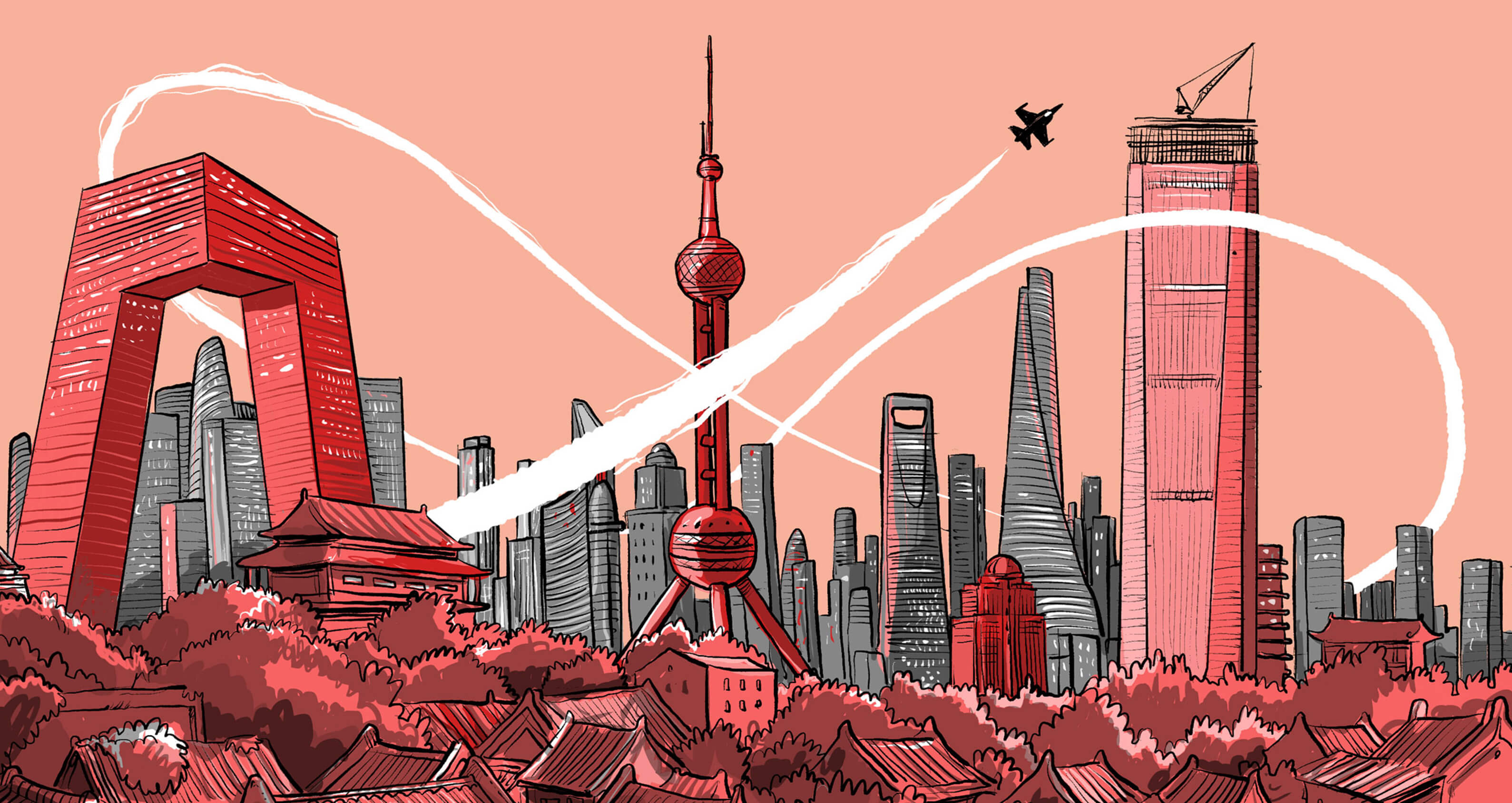 RELATED INFOGRAPHIC
The People’s Republic of China: 70 years of changes

The utopian socialist experiment, the Great Leap Forward, leads to the deadliest famine in human history. Official numbers suggest the population decreased by 10 million between 1959 and 1960, but most estimates place the toll upward of 30 million people. Discussions in China about the famine, which the party refers to as "the difficult three-year period", remain taboo.

The death toll in famine years

In 1949, around 80 per cent of the Chinese population is rural. Lacking capital to invest in modern machinery the government decides organising human labour is key to China’s development and begins introducing a system of communes in 1958 to harness the rural labour force to stimulate agricultural and industrial productivity. Each commune is made up of smaller farm collectives and consists of 4,000–5,000 households, while larger communes could encompass up to 20,000 households.

From livestock to kitchen utensils, private property is deemed communal. All resources are collectivised; private orchards and personal kitchens are prohibited.

Mao reimposes “Mao Zedong Thought” by launching the Cultural Revolution which aims to purge the country of capitalist elements from traditional Chinese society. The violent upheavals last until his death.

All of Mao’s comrades from the Long March, with the exception of Zhou Enlai, are sidelined or purged. Some die. Officials, generals and intellectuals are among those targeted in the name of protecting Mao’s Cultural Revolution.

Up to the mountains and down to the countryside movement

From 1962 to 1979, no fewer than 16 million “privileged urban youth”, including Xi Jinping, are sent to mountainous areas or farming villages to learn from the workers and farmers as part of the central government’s “sent-down youth” policy.

The central government discontinues the movement in September 1980. Most sent-down youth return to urban areas. Roughly 5 per cent remain after marrying locals or being assigned nonagricultural jobs.

Mao dies on September 9. His most fanatical supporters, “The Gang of Four” which includes Mao’s wife Jiang Qing, are arrested and jailed.

Crackdown on the Gang of Four

Hand-picked as his successor, Hua tries to continue Mao’s policies.

Hua is sidelined as the party’s collective leadership opts to turn the page on Mao’s political teachings and embrace market reforms by opening up to foreign businesses. The strategy, dubbed the "reform and opening-up policy", is still in effect today.

Beijing and Washington, under the Jimmy Carter administration, round up talks to build official ties effective the next year, seven years after then US president Richard Nixon’s ice-breaking visit to China.

Deng Xiaoping, the mastermind behind this historic shift, is Time magazine’s 1978 Man of the Year. In 1979, he becomes China’s first communist leader to visit the US.

The informal term paramount or supreme leader gains prominence during the era of Deng Xiaoping, who wields significant political power despite having no formal government position.

In 1958, the government promotes a population registration system and seeks to control internal migration. It is part of economic and social reforms promoted in the first decade of the communist regime. In 1985 the system was consolidated in the form of identification cards for the population.

One-third of the world’s population live under a Marxist-Leninist system of government. By the party’s 13th National Congress in 1987, it has about 46 million members.

Faced with student protesters demanding democracy and a crackdown on corruption, Deng and other leaders send troops onto the streets of Beijing to quash the demonstrations.

In the following days memorials and vigils are held around the world for those killed in the demonstrations. Since then the Hong Kong Alliance in Support of Patriotic Democratic Movements of China has held annual candlelight vigils in Victoria Park.

Hit by a series of Western sanctions, the party faces an uphill struggle to rebuild its image at home and abroad.

Jiang came to power following the Tiananmen Square protests as a compromise candidate.

The party sees its first peaceful transition of power at the top, with Jiang Zemin stepping down and Hu Jintao rising to general secretary.

Building on its successful accession to the World Trade Organization and winning bid to host the 2008 Olympic Games in Beijing, the party announces it has entered an “important period of strategic opportunity”.

Despite some blockades such as the EU arms embargo imposed in 1989, the party appears to have recovered from the backlash of the 1989 Tiananmen Square crackdown.

After the second peaceful power transition in the party’s history, Xi launches a massive anti-corruption campaign to keep the party clean and loyal to his leadership. Hundreds of officials across the country are investigated and prosecuted after Xi releases "eight rules" on official behaviour, which bar officials from indulging in extravagant and wasteful practices.

Click on the level button below for more information

Internationally, Xi rolls out the Belt and Road Initiative and asserts a heavier military presence in the South China Sea, ramping up rhetoric on the unification of Taiwan.

The Communist Party membership stands at around 91.9 million, representing around 6.6 per cent of the population. The party has 4.68 million grass-roots organisations, covering 99 per cent of China’s urban sub-districts and rural villages.

Only China, Laos, Vietnam and Cuba continue to call themselves communist states.

North Korea removed any mention of communism from its constitution in 2009 and has replaced Marxism-Leninism with its own ideology of “Juche”, or “self-reliance”.

This is the 15th in a series of explainers about the Communist Party of China by the South China Morning Post. Read the rest of the series here

What is China’s Communist Party planning for the centenary day?

China’s Communist Party: everything you need to know

Lessons from 1966: why we should never forget the disastrous consequences of the Cultural Revolution

A calamity made by man