Hong Kong is one of the last places in the world where bamboo is still widely used for scaffolding in construction. It’s flexible, strong and cheaper than steel and aluminium — metal alternatives that are now more commonly used in mainland China and elsewhere in Asia. In Hong Kong, skilled armies of scaffolders can erect enough bamboo to engulf a building in a day — even hours — using techniques that are thousands of years old, and have been passed down through generations.

Throughout Chinese history, bamboo has been widely used in construction. Bamboo scaffolding can be seen in one of China’s most treasured works of art, Along the River During the Qingming Festival. The piece, by imperial artist Zhang Zeduan (1085-1145), is famous for its depiction of day-to-day street life along the Bian River in Bianjing, which was the capital of the Northern Song dynasty.

Hong Kong’s scaffolding bamboo typically comes from the Zhaoqing area in Guangdong province and the Guangxi region in southern China, bordering Vietnam. The bamboo is usually transported to Hong Kong via Macau.

Bamboo is one of the fastest-growing plants in the world, and in some cases can grow 60cm a day, and eventually 40 metres tall. Bamboo has thick underground roots called rhizomes, which can grow quickly, creating new shoots metres away. Bamboo’s internal cell-like structure allows it to withstand compression, making it an ideal material for scaffolding.

Why bamboo?
Compared to steel, bamboo is much lighter, six times faster to erect and 12 times faster to dismantle. It’s also a fraction of the cost. Bamboo scaffolding doesn’t require sophisticated machinery or complex tools to erect, just skilled workers with nylon ties. If properly erected, bamboo scaffolding can be stronger than steel and far more flexible. The resulting structure is also easy to modify, if necessary. Bamboo scaffolding can be used for entire structures, or part of them. In Hong Kong it is common to see “bamboo balconies” jutting from the sides of buildings where renovations are being carried out on individual units, many floors up. A bamboo pole can also be cut to fit an awkward space, which is ideal for Hong Kong, where construction spaces can be tight amid the densely packed maze of buildings.

In Hong Kong, two types of bamboo are used in most scaffolding: Kao Jue (pole bamboo) and Mao Jue (hair bamboo). Mao Jue is thicker and stronger, about 75mm in diameter, with walls at least 10mm thick. It’s used as the load-bearing support. Kao Jue is thinner, about 40mm wide, and is used for platforms, bracing and horizontal support. All bamboo is at least three years old, and dried for at least three months. Each piece is about seven metres long, can be stored in the open, and typically usable three times before it starts to bend, split and weaken.

They are Hong Kong’s real-life spider-men, climbing dizzying heights with strength, skill and nerves of steel. But the future of the bamboo scaffolder business remains precarious, due partly to a lack of new blood as many turn to other construction areas such as bar bending. Today, there are 2,479 registered bamboo scaffolders in Hong Kong.

Depending on the scale of the project, scaffolders may spend all day many storeys up, even eating lunch there. Bottles may be needed for bathroom breaks
It can be difficult to erect scaffolding that’s safe and steady on some older buildings with weakened exterior structures

Working in Hong Kong’s summer heat can be uncomfortable for scaffolders. Proper hydration and sun protection is important

Scaffolders face risks every day, either falling or being injured by debris
The ground or structure that supports the scaffolding needs to be solid and level

Many decades ago in Hong Kong, bamboo scaffolders worked at heights with basic safety harnesses, or none at all. Much has changed since then and workers today must be trained, licensed and wear proper safety gear.

Safety belts: Must be worn at all times. Scaffolders normally use full body harnesses, which should be attached to anchorages
Hard hat: Must be worn at all times to protect heads from falling debris
Protective sleeves: These offer cover from the sun, and help protect arms from sharp surfaces while working
Gloves: To protect hands from injuries such as splinters, and provide grip for climbing
Safety shoes: They must be firm and have a non-slip sole

Safety belts: Must be worn at all times. Scaffolders normally use full body harnesses, which should be attached to anchorages
Hard hat: Must be worn at all times to protect head from falling debris
Protective sleeves: These offer cover from the sun, and help protect arms from sharp surfaces while working
Gloves: To protect hands from injuries like splinters, and provide grip for climbing
Safety shoes: They must be firm and have a non-slip sole

Scaffolding must come down as soon as construction or repair work is completed, according to Hong Kong regulations. To reduce risk of mishaps, dismantling should be carried out by “trained workmen under the immediate supervision of a competent person”, ideally the crew that erected the structure.

A group of bamboo scaffolding workers on the top of a 25-storey building in Causeway Bay, Hong Kong

Many scaffolding skills have been passed down from masters to apprentices over hundreds of years. Today in Hong Kong, most new recruits must undergo year-long training with the Hong Kong Construction Industry Council for a licence.

Training involves learning how to build bamboo platforms that are safe and strong enough to hold construction workers on all different imaginable sites. The toughest part of the job, though, is tying a proper knot to secure bamboo poles, which can take years to master.

Workers are typically divided into three ranks. Those new to the industry are apprentices for two years. They have basic tasks, such as passing bamboo poles, while also learning the trade. Those in the middle rank erect bamboo scaffolding while being supervised by masters — the highest rank — who work with engineers to design entire structures. Pay varies, depending on experience, from about HK$800 (US$101) a day to more than HK$2,000 a day (US$254).

Tradition calls for an apprentice scaffolder to discover if he is at risk of misfortune. If so, a feng shui master may recommend a ceremony to help cast out negative influences. Before work each morning, an apprentice should also be mindful about what he says so there’s no bad omens for him and his workmates.

Workers sometimes worship deities and wear a special belt that supposedly protects them from bad luck. It’s not uncommon for scaffolders to do a “bai san” ceremony for good fortune before erecting scaffolding at new sites.

Yau Chao-shi is a legendary sage regarded as the original creator of bamboo scaffolding. The 19th of the first month in the lunar calendar is his birthday, when workers pay homage to him.

Lo Pan, a master carpenter, engineer and inventor is another revered patron of builders and contractors, including bamboo scaffolders. The only temple in Hong Kong dedicated to him was built in 1884 in Kennedy Town.

Wah Kwong is also a patron saint among bamboo scaffolders, especially those who erect Chinese opera theatres. It is believed he defied the Jade Emperor, who demanded all bamboo theatres be destroyed after an opera he found insulting was staged.

1. Double- or single-layered bamboo scaffolding
This is for building construction or major renovations
2. Truss-out bamboo scaffolding
This is often used as an exterior platform for minor repair work of external drain pipes, spalling concrete and external rendering. The height of the scaffolding should not exceed 6 metres
3. Bamboo scaffolding for signboards
They are typically of cantilever construction with a maximum 4:3 length-to-height ratio. The entire scaffold is supported by steel wires or hanging posts attached to the structural elements of a building 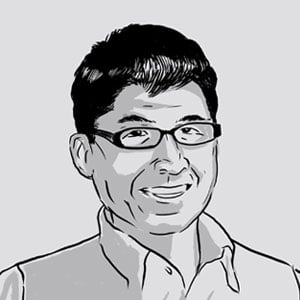 Why is Hong Kong last frontier for bamboo scaffolders?

Hong Kong worker falls to his death from 26th-floor scaffolding